On The Origins and Future of Shootout for Soldiers

A letter from Shootout for Soldiers Founder Tyler Steinhardt

In the words of Shakespeare: What’s past is prologue.

How We Got Here

In early 2012, a group of friends and I had watched a 60 Minutes special about the rise of veteran homelessness, suicide and unemployment. We were stunned at the scale of the problem and inspired to act on making a difference. It’s a noble pursuit, yet we had little idea of where to start. How can a bunch of kids affect such a systemic and wide scale issue? Our strategy was to use what we knew best: the sport of lacrosse.

We concocted the idea of breaking the world record for longest lacrosse game ever, and landed on a 24-hour event as a marketing stunt to gain attention. We’d have 24 1-hour games in a row, and participants would donate money in order to play in the event. As word spread about our crazy idea, community leaders in Baltimore and throughout the lacrosse world came to help.

Jay Dyer helped connect us with Paul Rabil and Kyle Hartzell who appeared in a local TV PSA for us…Karen Bolewicki rallied a team to grill up food…RJ Kaminski tweeted at celebrities…Lacrosse Unlimited stepped in to make merch…Brendan Owens ran registration off of Google Forms…the list goes on and on – there were over 300 people who volunteered their time, energy and resources in our first year, helping us pull off the first Shootout for Soldiers and fundaise $105,000.

That grassroots, community involvement is what drove Shootout for Soldiers from our first year in Baltimore to nationwide expansion over the next 8 years. We incorporated as a 501c3, hired a small staff, bought an RV, and started building out our nonprofit event. We made stops in Long Island, Boston, Dana Point, Columbus, Philadelphia, Houston, Atlanta, Denver, Raleigh, Salt Lake City, Seattle, Canandaigua, DC, and Hudson Valley.

Tens of thousands of people participated and played in events, some playing for all 24 hours straight, or with their kids, and even some who re-emerged to the field after nearly losing their lives. From as young as 6 to as old as 76, games lasted through the night and into the morning all across the country. We had costume games, wheelchair games, rain games, donut eating contests, dog rufferrees, celebrity sightings, sunrises, live music and bounce houses. We rallied the community in each city we went to, cultivating a high-energy, fun and inspiring atmosphere.

Thanks to local organizers and volunteers, we’ve ran 50 events in 15 different cities – raising over $4.5 million. We grew from the grassroots in each city, steadily expanding our reach and impact nationwide.

The Future of Shootout for Soldiers under Team RWB

Yet after running the Shootout for Soldiers for nearly a decade, and having a year to reflect as we paused amidst COVID, it’s clear that it’s time to turn the page and start a new chapter. We’ve built a vibrant community, developed a clear operating model and demonstrated how we can make an impact. Now it’s time to throw gas on the fire and scale this operation to something much larger.

In my view, Team RWB brings three incredible things to the table that get me excited about the future of this event:

To be frank, I’ve been writing and re-writing this letter for the last month. The most exciting part about this transition is also the toughest element: that there will be new leadership at Shootout for Soldiers.

Through this event, I have met some of my closest friends in the world, gotten to deepen my relationship with my sister, travel the country, meet awe-inspiring people, learn how to build a business, transform my career and make an impact in our society. I will miss the sleepless nights filled with lacrosse under the stars, the coffee runs, jersey sorting, road trip dinners, hectic thunderstorms and check presentations. Above all, I will miss the people. I am so grateful to those who have invested their time and energy into building this organization – none of this would be possible without you. My life is so much richer because of the time that I’ve spent with Harry, Sully, Merry, and the many others that Shootout has brought into my life.

But new leadership also means new ideas and a new approach, and I’m excited to see the future that Mike Erwin, JJ Pinter and the Team RWB crew chart for Shootout for Soldiers. I’ll never be far away with a coffee in my hand, ready to help. 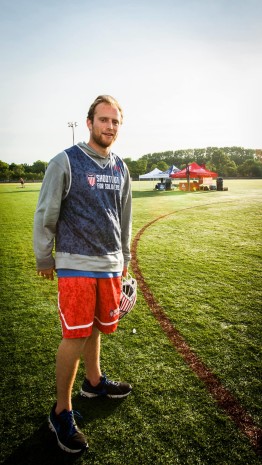